Kori's spinach, ham, hash brown crust quiche. On top of the browned hash browns, add the sauteed mushrooms and onions, the cup of spinach, and the pound of spiral sliced ham. Spinach & Bacon Hash Brown Quiche With a crust of crispy hash browns and a rich, creamy filling studded with spinach and bacon, this cheesy quiche is comfort food at its most satisfying. Delicious for breakfast, lunch or supper! 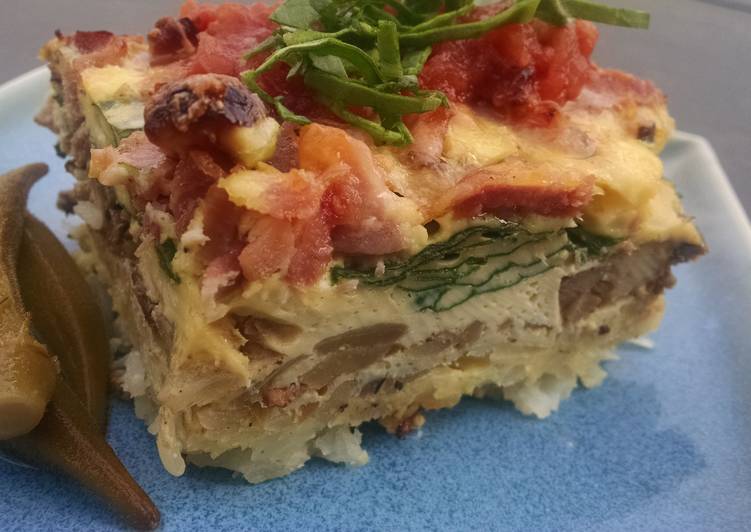 Press a piece of foil over the chilled crust, fill with pie weights, raw beans or rice. Remove the foil and weights and bake until the crust is light brown. This Spinach and Onion Quiche with Hash Brown Crust is a real show stopper with its mile-high crispy hash brown sides and silky smooth spinach and onion laced quiche interior. You can cook Kori's spinach, ham, hash brown crust quiche using 12 ingredients and 7 steps. Here is how you cook that.

It's the type of dish that elicits oohs and aahs as you bring it to the table and will surely be met with rave reviews once your guests try a bite. To prepare filling and bake quiche: Evenly scatter bacon, spinach and Cheddar over the crust. Whisk eggs and sour cream in a small bowl until smooth. Whisk in milk, salt and pepper.

Pour the egg mixture over the other filling ingredients. In the same skillet, saute the onion, green pepper and mushrooms in remaining butter. Remove from the heat; sprinkle with flour. Combine eggs, half-andhalf and salt in a large bowl and whisk until well mixed. Arrange spinach on bottom of pie crust.